Webinar on ‘Old and New Media: Transformation of Journalism’

The Department of Media and Mass Communication, AIUB organized a webinar on ‘Old and New Media: Transformation of Journalism’ on 25th August 2020, Tuesday at 5:30 pm. Sabir Mustafa, Editor, BBC News Bangla, addressed the audience as the keynote speaker.

Mr. Mustafa in his speech said that digital technology affected journalism profoundly all over the world. He mentioned that new media has been shaping the entire journalism industry and traditional linear media are getting replaced by non-linear integrated media.

He told that the BBC News Bangla’s emphasis has been shifted away from radio towards digital – online operations were expanded, social media platforms launched and increasing importance given to video.

He also mentioned that ‘as radio listening continued to decline in Bangladesh, BBC Bangla’s morning radio programmes were closed and digital output strengthened’.

The speech was followed by a question-answer session where students asked about recent trends of the media industry and also sought suggestions about their career planning.

Mr. Mustafa suggested media students who in future will be working in the industry to learn new skills and prepare themselves to remain viable in the industry.

The program started with a lively welcome speech by Dr. AJM Shafiul Alam Bhuiyan, Advisor of the Department of Media and Mass Communication.

The webinar ended with the vote of thanks by Dr. Tazul Islam, Dean of Faculty of Arts and Social Sciences.

Afroja Shoma, Assistant Professor of the MMC Department coordinated and hosted the program. 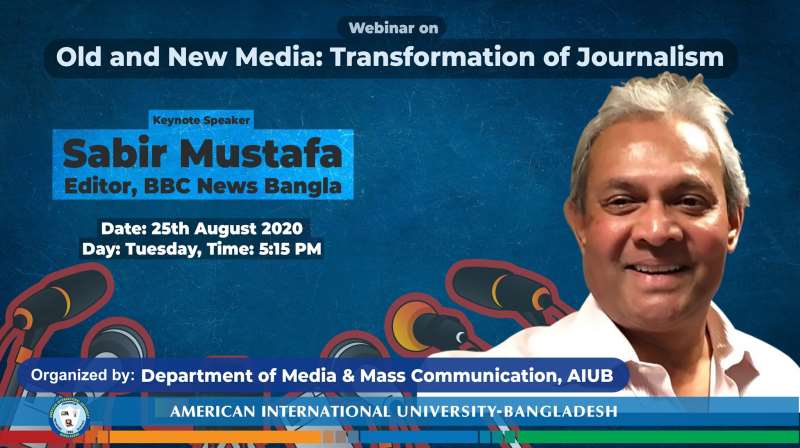