The search for quality is finding its way now among the universities in Bangladesh. The concrete intervention  of the government by designing a system for quality assurance in the universities is a laudable undertaking which would enhance the quality of academic programs. As an initial step, universities were selected and grouped to participate in the project which would eventually include all the universities who can prove its commitment  to undertake the project. The American International University-Bangladesh (AIUB) is one of the thirteen universities who were selected to spearhead the project on Establishing an Institutional Quality Assurance Cell (IQAC). Although AIUB was the first to establish a cell 4 years ago, the participation of the university would provide more opportunity for the academic and nonacademic staff to widen their horizon in understanding the intricacies of quality assurance through internal and external assessment of the essential components of the university system. Today, 18 December 2014 was indeed a significant day for the 13 universities headed by its Vice Chancellors, Pro Vice Chancellors, Directors and Additional Directors  who entered into a contract with the University Grants Commission for the Establishment of the Institution  Quality Assurance Cell (IQAC) stipulating the terms and conditions of each party. The contract also provides funds, its sources, mode of expenditures and accountabilities of three parties: the University Grants Commission, the Vice Chancellor and the Director of the Project. The contract was formulated based on the Operation Manuals which serve as guideposts for the operation of the Cell. The Performance Contract Signing Ceremony  was held in UGC Auditorium  with the Prof. Dr. A K Azad Chowdhury, Chairman (State Minister), University Grants Commission as the Chief Guest. Being one of the brains of this breakthrough in higher education in Bangladesh, he was confident that this project will result to a better delivery of higher education in the country. The Honorable Vice Chancellor of AIUB, Dr. Carmen Z. Lamagna , Pro Vice Chancellor Dr. Charles C. Villanueva, Dr. ABM Rahmatullah and Ms. Farheen Hassan represented the AIUB in the signing of the Performance Contract which took place immediately after the Address of the Chief Guest. The project will officially take off on 1 January 2015 with the corresponding funds allocated to AIUB to operate its IQAC. 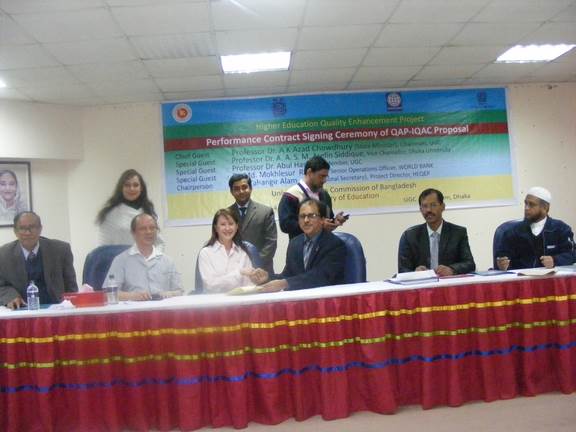 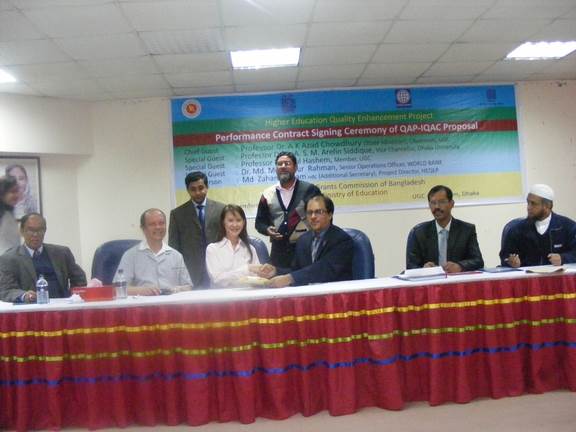 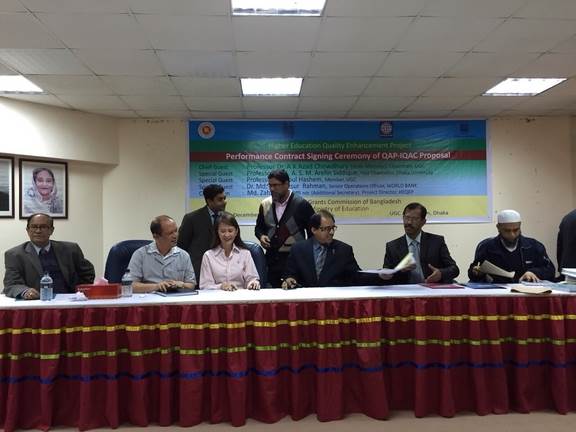