Thursday 10 May 2012 Department of Accounting has organized a holistic talent hunt program in AIUB with an objective to evaluate students’ analytical ability, creativity, communication skill, presentation skill, public speaking skill and above all accounting knowledge. Accounting Intelligence Test (AIT) – 2012, has been lunched for the first time by the Department of Accounting on 17th April and the grand finale held on 19th April, 2012 in AIUB Auditorium. The whole program has been designed to evaluate students under several tiers. The first round was the screening round, where out of 39 participating teams, four teams (has been called “Fantastic Four”) have been selected for the final round. 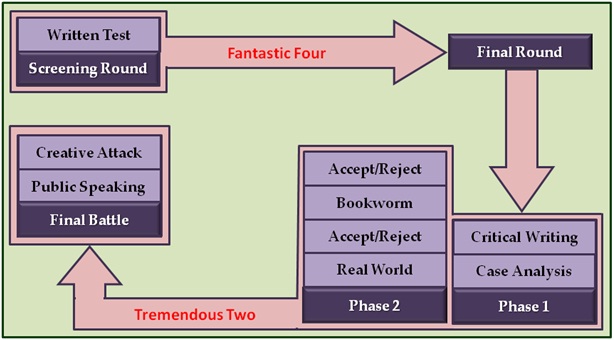 Just after the quiz contest, the results of the first phase of final round has been revealed to get the final two teams (has been called “Tremendous Two”). The tremendous two teams were then participated in the final battle where each team has been asked questions by their opponents (the round has been called “Creative Attack”). The contest has been closed with a public speaking contest (PSC). The program was graced by Professor Dr. Charles C. Villanueva, Dean, Faculty of Business Administration, Dr. Nisar Ahmed, Director, MBA Program, Dr. Md. Dulal Mia, Head, Department of Finance, Mr. Mohammad Zakaria Masud, Head, Department of Accounting, and other distinguished faculty members of Accounting and Finance department. The Department of Accounting would like to express sincere gratitude to Mr. Rashedul Hasan, Lecturer, Department of Accounting, for bringing out such an idea and for taking the initiative to execute the idea. We do also like to thank Dr. Md. Dulal Miah, Mr. Md. Kamrul Bari, Mr. Nikhil Chandra Shil, Mr. Mohammad Faridul Alam Ms. Samia Tarannum Chowdhury and Ms. Taslima Akter for taking the responsibility to judge different rounds of the program. The overall event was managed & moderated by Mr. Mohammad Zakaria Masud with the help of all other faculty members of the department. The Department of Accounting is grateful to the members of the AIUB Business Club (ABC) and the students of the department for their colossal support in organizing and managing different events under AIT - 2012.